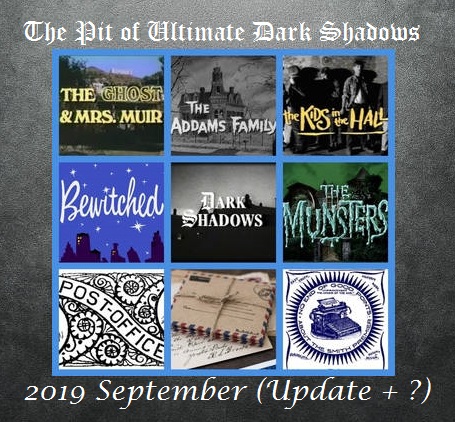 Yes! My calmer self is speaking these days. Discussing why this show ended up being more me talking over details than the radio drama project part of it: commercialism online was a massive component of that and what commercialism did to our social lives. Seeing the difference in community organized creations versus commercial creations.

Topics in my consideration of a potential Dark Shadows continuation program, digesting that and how it might affect everything. How I’ve digested other series apart from Dark Shadows, and how friends have made adjustments for other new releases. Also why I and others chose Dark Shadows to view. Making choices about other entertainment productions (Star Wars, Star Trek, etc.) How a new show doesn’t really change anything for Interruption fanwork.

My delving into Dark Shadows movie fanfiction, having fun with that and why I enjoy it. The choices that I make with productions by Burton & company, as well as my being in the middle for those, along with what precious few fun-spooky flicks we had prior to Burton’s work. Why it’s helpful to do longer reviews in a chronological format.

Some addressing to the pen pals, keep in touch, thank you!

Also available on iTunes, as always…

Just wanted to post a newer reference. I hope you’re all feeling better. I am, and it’s from using a lot of internet pieces much less. True, I’m still on a computer a lot, but that doesn’t necessarily mean “being online”. (I also have memories of using computers before the internet. I remember cassette tapes having programs on them too, before floppy disks over took that.)

Anyway, I’m content with my escape routes, though a bit shaky. We have to admit we have gone through some awful troubles with all of this online stuff. There are old friends and a few family members I miss that I will likely never hear from again due to what all the scarier online addictions did to our social lives, not to mention our brains and emotions.

Even me, who did so much to keep to myself, got roped into the turmoil and created more to get the attention that the attention economy was programming me to do as well. Getting spazzed out and messed up surely didn’t help my social life as was advertised in many social media opportunities. Yes, it is very confusing to see hearts, stars, happy-faces, “likes” and friendly icons all over zones that pretty much infuse people with outrage, hate-speak, anger and emptiness. Confusing to say the least!

And I got to record myself going through it! Remember my intro to Episode 8 (or was it 10 or 11?) where I happily admitted a certain social network “was actually *good* for something!”? We had been skeptical in the beginning, remember? We ought of to have stayed far more than skeptical, my friends. (Mum and Auntie did, bless their hearts!)

Well, do heave a sigh. Breathing will help. I’m slowly gaining a variation of my new life and new friends coupled with a few of the old friends and life. I hope you all are doing this as well, and that it is healthy and helping to remove some of the damage we’ve all been through (and some are still going through.)

P.S. I’d say “get in touch”, but it’s likely you’re not ready yet. Hopefully this is from total embarrassment instead of hate or becoming a vegetable. If you’re embarrassed that would be incredibly human on a higher level. (Yes, you TOO can be Barnabas Collins, and more so now than ever before! Yikes.)