I’m still here. I’m rusty at creating a radio drama episode but, like with any form of creative expression, the knack should return with practice.

I maintained Facebook abstinence for the full two-week stretch from the new pen pals and people I’m mailing CDs to. I love it! This is what I wanted and it’s the world that I know. My postman is also very happy with me. He says, “You tell them that I’m happy with what you’re doing and I look forward to getting a hug from you when I see you. You tell them that.”

The repeating cold/flu is still floating around. Clover and I got Version 2.0, Jonah didn’t, and my sweetheart is now on Version 3.0. I received tons of wonderful goodies for my birthday but I have to wait to have him to myself again.

So for my pen pals now getting the CDs of The Pit? Bless your hearts that you didn’t let the dead-weight of social media keep you from what you loved. And it’s fascinating to find out what you’ve been up to in the years we didn’t know each other as I struggled in the vicious Red Queen’s Race of anti-social networks. You also know it takes time to build something, so my own accomplishments might seem fantastic but not impossible to you.

And with my downgrading back to human? Other humans are doing it too. I hear from people more by email and private messages away from the social networks. Sadly some of these folks are still playing the “avoid-the-podcast-topic-game”, but not everyone. Some finally realized playing that game is dysfunctional and annoys me enough to get cranky on the podcasts! Good! I’d rather have fun on those shows, not feel the need to display rank bitterness. (Spraying metaphoric Lysol on my woes ends up making them worse. It messes up the voice-acting for the radio-drama too, just from the stress.)

In any case I’m very pleased to be spending my time getting rid of my horde of stationery. Like most forms of collecting things, too much comes when life is empty or there is a void one feels the need to fill. Now I’m releasing all the fun goodies I saved, and as I send them along? I keep finding new areas in which I’ve hoarded more! But it makes way for further space as I go. This is a good thing.

The pen pals who are interested are eager for more but in the manner they know better: The human paced postal system. However there are some trying to get links to work in a somewhat desperate sense. I always know when they do get the links to work because I tend to never hear from them again. I see the statistical growth, but the silence is a recurring problem and one I doubt I’ll ever really get used to. 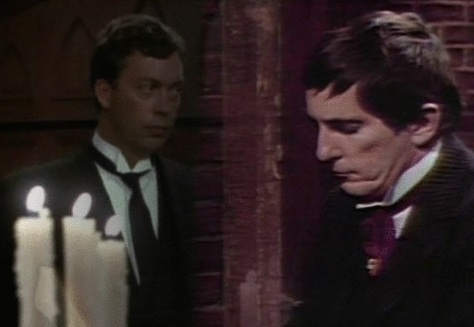 Is a Jonathan Frid character hanging out with a Tim Curry character just too sexy? Maybe!

With the lack of information I used to have, but now am being provided with, I’m discovering an important point we all forgot about. The poor and suffering are the most appreciative of good entertainment. They were often the people I was seeking, too. Still am. It’s the especially wealthy and comfortable that have been the worst problem. They’re watching a soap-opera because, for the most part, they have few troubles, desire drama and don’t empathise much with people outside of themselves. They can download the podcast easily and get angry at me for struggling and suffering. They’re greedy and want the silver-spoon version of The Pit. Catering to people like that is detrimental. Rewarding rudeness is nothing short of despicable.

Not all rich people are this way, though. There have been many well-to-do types of privilege. I am currently thinking of a fictional one though, and one fictional character many proclaim as empty-headed and bubbly:

She is a rare wealthy character on Dark Shadows who cares about classes below hers. Her concern and desire for comradeship with Angelique is unusual for someone of her own designation in 1795. We see something quite similar with that of Barnabas Collins and Ben Stokes, too. And when we think about Barnabas and Josette both being as such? That is certainly a match made in Heaven. ❤ 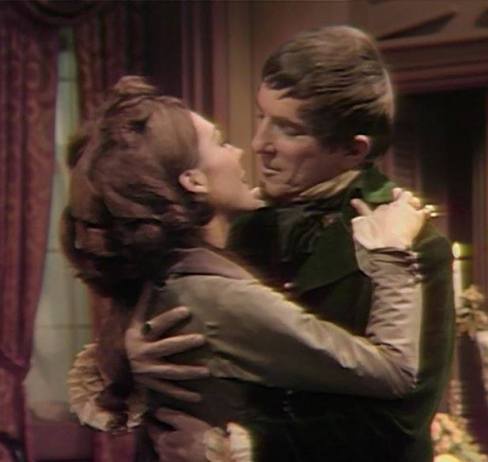 We require wealthy people that empathise with those who suffer to make the difference, as we also need the suffering to appreciate each other. To me that’s what our stories show us.

Social media turned that story-telling, which changed our lives for the better, into mindless nostalgia of photos to thumb-up. It preys on the obsessive-compulsive-disorder which resounds in us to click happy-buttons and lose the heart of who we are. The happy-buttons, rewards of hearts and stars, regress us into kindergarteners. Kindergartners are easy to manipulate.

I didn’t know this was happening for so long because I had barely touched the social media. I was very involved in vision-therapy, librivox audio books, and creating The Pit of Ultimate Dark Shadows while watching and taking notes of all the shows that blend into it. I knew something of the smartphone phenomenon but we all joked about that long ago. The Blackberry phone came out with its whistles and bells and what did we call it?

A lady at church told me it was once a faux-pas to like-click posts on Facebook. She also recalls a friend asking her, “What’s with all these bumper stickers? I’m seeing them everywhere. All these images with quotations. What a waste!”

As it turns out there are others like me who didn’t see this happening either. We still used the internet to educate ourselves and keep in touch with loved ones. We had to hear less and less from those loved ones to begin recognizing we’d suddenly been left in the lurch. That led to many walks of life without similar interests reaching out to at least support each other in that one obvious fact. We were alone, very alone. A guy on a Gothic forum told me, “Some of the most artistic and rebellious people I have ever known have been siphoned by this conformity.” No kidding! I’ve seen it too.

In any event, those of similar interests are finding each other again, however slowly and I am very grateful. Several pen pals don’t fear discussing The Pit episodes. They enjoy it. They didn’t know it even existed. Now they look forward to more and express:

“Please keep up with this – you will be glad you followed your muse when she called you. But please don’t burn out on it—it would change the tone. You have such a happy enjoyable tone of joy with it. Yeah, that’s it—it’s JOYFUL! Ride this mule, baby!”

So for all the newbies:

I bid you welcome to The Pit of Ultimate Dark Shadows!

And for the old-hats? I welcomed you a long time ago, and I still do. But we must keep something in mind. We have flaws. That is human. You’ve felt guilty and uncertain because you fed into the bystander-effect, got caught up in only paying attention to the drama, lost the ability to talk about what you enjoyed. Is this all your fault? I don’t think so. But you still feel guilty and uncertain about me and the fact you played the “avoid-the-podcast-topic-game”. You really should stop playing that game. It’s not a fun game and no one wins it. (I prefer Kill Doctor Lucky and Tabloid Teasers, myself.)

But… what if you admitted to your flaws? What if you felt sorry and explained? In what light would you be seen if you owned up to a mistake or even several? Who would you be very akin to if you exhibited some remorse or apologetic forms of expression?

That would show you to be similar to one of our most beloved characters in the world:

This is a very newsy and studious monologue. I’ll address what’s going on with the letter-writing method of listening to the series and knowing that many who want to hear this can’t always download or play it via having poor equipment.

Lots of discussions of people I’m talking with lately: Auntie, Jonah, etc.
Identifying interruption fan fiction and how it works with Osheen Nevoy and Lisa Weyenberg’s works as key examples.

Tons of spoilers for The Pit and later on a lot of spoilers for the marriage novel I’m creating in tandem. As per usual, this talk and explanation is quite cerebral, as well as moving back and forth discussion on various show characters being responsible for solutions in The Pit, including Endora and Uncle Arthur from “Bewitched”, as well as Wadsworth, Captain Gregg, Lily, and Morticia.

Plenty of goodies about Doctor Who coming into play for The Pit and exactly why he will.

And yes, it is downloadable from iTunes, as always...